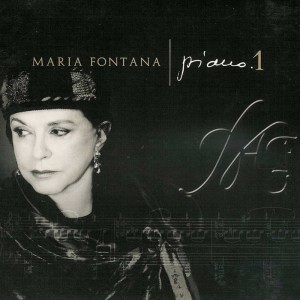 Maria Fontana
In Il Libro del Cortegiano (The Book of the Courtier), published in Venice in 1528, Baldassare Castiglione recounts imaginary dialogues at the court of Urbino, where Federico Fregoso says: “The courtier should turn to music as if it were merely a pastime of his… and although he may know and understand what he is doing, in this also I wish him to dissimulate the care and effort that are necessary for any competent performance; and he should let it seem as if he himself thinks nothing of his accomplishment which, because of his excellence, he makes others think very highly of.” No one could better describe the art of Maria Fontana, an extremely rare personality in the midst of the Brazilian elite.
Maria Aparecida Cunha Fontana was born in Araçatuba (São Paulo, Brazil), where her father, an engineer, directed bridge construction. Very early she displayed musical talent: at the age of five she could play by ear melodies with the appropriate harmony and rhythm. Due to her father’s work, she had to move frequently, and that did not allow her to have a systematic musical education. She then settled in Campinas where she graduated from the Music Conservatory.

She also studied with João de Souza Lima, in São Paulo, and later attended classes in the extension division at the Juilliard School. In the mid 1990’s she decided to take her piano playing more seriously. Advised by playwright Maria Adelaide do Amaral and film director Hector Babenco, she called me in New York. She wanted to improve, wishing to leave a musical remembrance and an example to her grandchildren.
As a pianist, her style is romantic, idiosyncratic, sincere, and without any sentimentality. It would be a mistake to compare her to competition winners: her art parallels that of singers. Very few pianists are able to make the instrument sing like Fontana, her melodic lines, full of emotional generosity, simply soar.
This CD is a document of our work and it is therefore with pride and pleasure that I present my pupil and today great friend, Maria Fontana.
©William Daghlian
New York, 2003